Yes folks it is finally time to talk about this program and not have to hold anything back. Formally announced today CAMWorks For Solid Edge will be the first truly integrated CAM program for Solid Edge. The question has been posed many times why NX Cam Express  (NX CE) could not be ported to Solid Edge. Quite simply NX CE is design to work inside of NX and to accomplish that has to be capable of opening legacy files from way back in NX and work on them.   Solid Edge files could be imported into NX CE but they had to then be translated into a version of NX Cad to work right.  There was and is no way to take and make Solid Edge directly and truly integrated under these conditions so the search began for an integration partner.  Siemens owns it all by the way so the idea that NX did not want to port NX CE to Solid Edge because it would cost “them” profit is not valid. It was for technical reasons only.

A truly  integrated CAD and CAM program  brings efficiencies to the manufacturing world that can’t be accomplished any other way. One mouse click to get to Solid Edge and one mouse click to get back to CAMWorks For Solid Edge. Right there in the same environment and on the same “page”.  It is the only way to go if you can. I am pretty sure every reader of this post understands the power here so I am not going to dwell on this.

The criteria to be met once NX CE was ruled out was to find a company that had solid knowledge of CAM with proven products and a track record of success with integration.  Along the way it became more complicated when HSMWorks was bought out. Now it became imperative that the partner company not only be qualified but also not  be in danger of being bought out from under Siemens feet as HSMWorks was with Solid Works.  Siemens works in ten-year planning periods and they had to be sure that their partner choice was also committed to this ten-year planning period too. Not only do they want to know where they will be in ten years they want their customers to know. Stable rational management planning capabilities both in Siemens and with their customers is predicated on knowing what your tools will be so you can make plans accordingly.

There is something like fifty or so differing CAM programs I have been told and when the search began it was a little daunting for the Siemens SE integration guys who had no idea the CAM market was this populated. They were used to CAD and that market is nowhere near as fragmented. However when you start tire kicking a bunch of them fall to the side quickly for a variety of reasons.

Geometric’s CAMWorks was the final pick and became the integration partner. I have had the privilege (Such as being a beat tester is as those of you who have been there know!) of being a beta tester for CWFSE (CAMWorks for Solid Edge). Now understand that we did not have the Beta to play with until three weeks ago and I did not actually cut parts with it until Wednesday through Saturday last week. As a result it is hard for me to sit here and try to answer questions other than in generalities. I do feel qualified to do that however.

CWFSE is not a simple CAM program and there is not a simple one out there however that can do all the things CWFSE does. This is the price to pay for having a powerful program at your fingertips.  Automatic Feature Recognition like that found in CWFSE  is a very powerful tool that is in many ways the CAM equivalent to the Synchronous Tech capabilities in Solid Edge. To make it work right you have to properly set up your tool crib. Once this is done AFR is quite powerful and in many cases will automatically yield tool paths that will need little tweaking to completely cut a part. For those of us like myself who still like to work off of features I pick Individual Feature Recognition is a great tool. Plus you can get  Volumill with CWFSE and the metal removal capabilities there are nothing less than phenomenal. We were looking up recommended speeds and feeds from the Volumill Milling Advisor and were a little timid to take their word for things at first. Cutting 4142 with a .5″ five flute end mill at 1″ depth with a 7% step over at 287 IPM is not something I have done before.  I am counting dollar signs for the future as I contemplate the increased efficiencies CWFSE and Volumill will be bringing to this shop.

In any case there will be a far more about CWFSE in the near future as this new program is put through  its paces.  I am just VERY pleased to be sitting here at SEU2013 today and see the culmination of CAM integration finally happen for Solid Edge. This is extremely important to Solid Edge considering the fact that  design software has no reason to exist without a product being produced somewhere at some time from it.

Solid Edge is now a complete manufacturing environment. I prefer to think it is the best midrange MCAD/CAM  manufacturing environment out there. There is a synergism that exists here with Solid Edge’s direct editing capabilities with Synchronous Tech and the Automatic Feature Recognition when set up with CWFSE and run in conjunction with Volumill.  OK, I admit I am biased and opinionated here about this. But I have good reason to be and I don’t see anyone else out there with this power to deliver productivity to shops that actually make things. And as a big bonus feature I know where Siemens is taking us in the future and it is to better productivity tools and no cloud type junk.  Their feet are firmly planted on the same ground I have to walk on and their manufacturing considerations are the same as mine because they are using it in their own manufacturing ecosystem.  Practical solutions and planning for real problems we all encounter and I can’t ask for anything better. 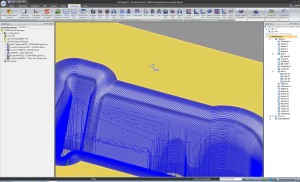 6 responses to “CAMWorks For Solid Edge”