One of the things I considered when shopping for a new mill was High Speed machining. The idea that smaller end mills at higher RPM’s would yield more cubic inches of metal removal per hour than old school big hog slow rpm ones would. And that in addition my mill would be hammered a lot less and the end mills last longer. Another consideration keeping this in mind was the choice between a direct in line spindle or a gearbox driven spindle. I chose the direct drive 10,000 RPM one for my mill for two reasons. A better finish possible due to vibration reduction from the gearbox and the fact that the in line spindle actually has a much higher torque output than the gearbox does from around 1500 RPM if I remember right on up to the max RPM.  The only serious consideration I had for the gear box was tapping holes but then thread milling is the answer for tapping problems above 5/8″ which the in line drive does just fine.

So I am cutting some tool paths for the first time with Volumill and I thought why not get some pictures of this. Just like freezing Humming Birds in flight with the camera lets just see what chips look like was my thought. 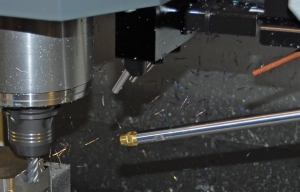 Now I had been told that the best way to cut steels and stainless steels  was with carbide and to cut it dry with proper feeds and speeds. This produces nearly complete heat transfer from the cutter and work piece to the chips. Part of the problem with coolant and carbide and HSM is that carbide does not withstand the thermal shock of heating and cooling that happens with being engaged in the cut and then quenched with coolant. It will break the edges down prematurely.

So I get the trusty old camera out and the above picture is the result. I thought it was interesting how hot the chips were that they would have temper colors just six or so inches away from the cut. Now let me tell you these chips were moving fast and there was a lot of heat there. When we finished the roughing cut on this part I put my hand on it and it had barely perceptible heat above what the table on the mill had.

This part we were cutting was 4142 steel and we were using the Milling Advisor recommended f&s of 10000 RPM and 269 IPM. I for one find it quite fascinating how technology advances in all areas at the same time to give different results where the rubber hits the road. From the carbide substrates and coatings in the end mill to the algorithms used in Volumill and the idea of faster smaller deeper cuts with in line spindles we get a whole new way of productivity. And seeing is believing.