I am assuming that your arrival here to this blog means you have an interest in the direction Autodesk is taking with its software. I mean all of it from movie making to design and machining to planning civil projects. All of it and all users who stay with perpetual seats with the upcoming dramatic cost increases or decide to begin for whatever insane reason subscriptions with Autodesk.

What has been a position of mine for some time is that perpetual seats make a software developer accountable to users. It means quite simply that users have an expectation of improvements as the carrot to renew. If the software does not improve they can simply stop paying and operate for years. For users of Inventor Pro HSM any real worthy new additions to the CAM side have been lacking for about two years. The frequency of beta updates which gave users the benefit of seeing incremental improvements from many per year have dropped off to just one since last December 12th. Notably considering the dearth of CAM improvements a backplotter from Cimco is on the chopping block now. So add to the dwindling improvements and new features the removal of an important traditional one.

So this week 4-3-17 sees some comments started at the above link. I am going to post some of them here for a reason. Typical user comment longer than most. 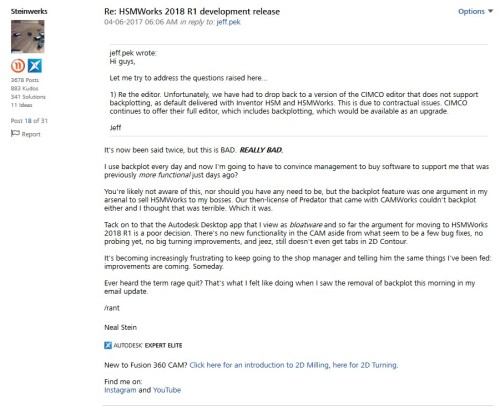 Corporate talking head explanation that basically Autodesk wants to now charge for what used to be included. Remember Autodesk and their subscription future is purely a scheme to force customers silly enough to stay or go there to spend far more money for status quo at best and I figure it will turn out to be less than that. They are I believe going to subdivide out traditional features and expect to charge for those on top of raising costs much higher over program costs that have been the norm for years with them. This is a common thread at the below forum link where Maya and 3DS Max are discussed at length along with Autocad.

I want to compel you the reader to do more than a cursory analysis of this situation with Autodesk so I put these teasers in here in hopes you will spend significant time reading at length the material in its entirety in these forums. This is a common thread throughout another Autodesk forum. Mainly that traditionally included features that are needed are being eliminated so that they can be sold as add ons in the brave new subscription world. Remember that subscription removes your power over this and you take what they are willing to give and for far more. Sans significant new improvements of course. One of the powerful tools Autodesk will soon be using against holdouts and the rebellious is updating file extensions. You need the new Autodesk whatever to open the new DWG for instance. Just to improve your user experience and software reliability of course 😉

Softimage for Maya going away for subscribers.

Folks you really really need to spend significant time in this Moving To Subscription forum to get a feel for the future. Replete with lots of corporate psychobabble justifications and evasions and attempts to put lipstick on pigs. See what other customers are finding out and sad attempts of placation by Autodesk.

An independent blog that goes way past superficial in analysis of what is going on. I have mentioned BlogNauseum before but there is new info all the time. You need to catch up and stay current with information here.

Potential and actual Autodesk customers have a decision to make and it is unavoidable. You decide to revolt against this and seek an alternative right now while you can rationally plan your move you will be in charge. I figure perpetual seat holders have easily a year to work out their solution even if they let the software lapse. It will still be current enough. Subscription only people were crazy to ever begin to go down this path and they deserve whatever happens to them. Perpetual seat holders who think they can stay and survive under this new way better think twice. Costs will escalate for less product. You will be expected to pony up additional costs for “add ons” that used to be included. You will get fewer new features and bug fixes will take longer if they are indeed ever done. Significant new capabilities will be things you read about other software companies producing for their users. You will not be a part of that any more. Autodesk has stated their goal is to make your perpetual seat existence untenable and they are going to pull out all the stops to force you to leave that world and enter subscription Hell. You stay and you will pay pay pay.

I have to admit that it gripes me to no end to have sent in another years money in December only to find out whatever they do with Inventor Pro HSM won’t matter because it looks like I have to stay with 2017 if I wish to use backplotting. Autodesk has gone from class act to class ass in a half year in this writers eyes.

Last but not least and emblematic of the atrophy of timely fixes and real improvements is this. Brought to you by the New Autodesk Way. Keep in mind probing was supposed to be a working new feature with Inventor Pro HSM 2017 and HSMWorks to follow in short order. It is done in neither of them and there is no longer even a pretense of a finite timeline to completion. Just guesses none will stand behind.