HEY, You Siemens Guys in Germany Listen Up

I can’t for the life of me figure out why you care so little for your public face and how the world sees you. So I get emails today and I think it is worthwhile to comment since the situation has me fired up anyway. Here I am less than a day later from the latest upFrontezine I commented on and this is what I get from you guys in my inbox. 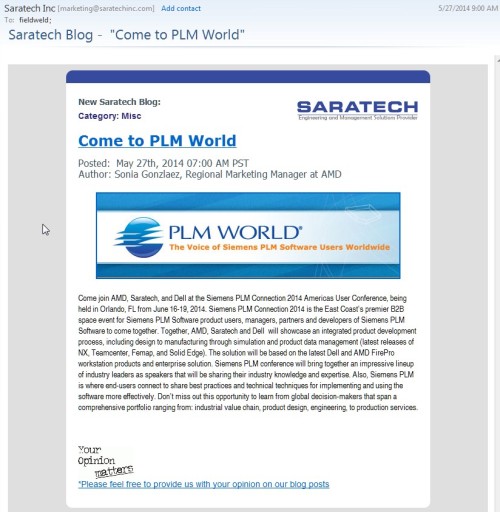 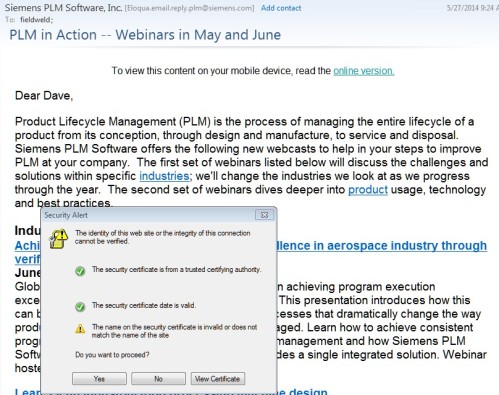 Please note that Saratech, a company that apparently does care about it’s public face although it is an infintesimal midget compared to the fiscal might of Siemens sends this email today.

Also note the email from the hapless incompetents you have hired to do a job that I get from Siemens. Complete with the only warning I will get today from any site or email. Let me ask you some questions. Why does this occur so often with you people. Do you hire and keep incompetents as a matter of policy or do you hire good people you then make look stupid by choking them for funds? I really wonder why all this is. And today I can’t login to the BBS or community once again and I just give up there. It is so surreal that nothing happens and broken new things all the time and old problems that never go away.

Let me ask you another question. Is the financial difference between 500,000 and 1,000,000 sold seats of no import to you? Kind of like what you could have had if you freed up your company to pursue these types of numbers. Dassault is begging you to take their customers and you just sit there twiddling your fingers.

And another thing. This Siemens publicity stuff you guys grudgingly produce. The one where all that is said is “Siemens” Siemens what, rockets, tiddly winks, time on a shrinks couch? What the heck are you selling? Let me tell you something. When I am looking for a product I need names and accurate descriptions of what you sell or I am not going to stop in to have a look. Read the following. This was a comment posted on my Lackluster SEU2014 launch post a few weeks back. It has been in my mind ever since. This is in England which I presume has some differing hands in charge. What is not differing however is the irrational and incompetent policies that are evidently being dictated from you wonderful people from Siemens corporate in Germany. Read it and weep for what you throw away. Unbelievable. I am disgusted with this whole situation and since I can’t figure out who is precisely to blame you all are. The thought though that the buck does eventually have stop at the very top does come to mind however. And the top is in Germany. Quit looking in mirrors and start looking around at what you have done. You guys worried about paid leave days a couple of years ago and made SE employees take them so it could help your books look better. I don’t know how that works but when in Huntsville that was the topic being discussed one day when I was there. So you guys save a few thousands of dollars and piss away over a hundred million in lost SE sales potential because that is how prudent German Siemens managers do things. Please explain the logic here to me?

“It is a shame that while Dan Staples and his team are trying hard to stay ahead of the pack in technical terms, the sales suppression team are also excelling in keeping their heads below the parapet.
I attended a 3D Seminar in UK the other week (Develop 3D Live), sponsored by Dell, AMD Firepro & Windows (interestingly, no Apple or Nvidia). The Gold sponsors were Autodesk (known for CAD software), Solidworks (known for CAD software) & Siemens (known for electricity generation and railway locomotives !?)
Once I could break into the staff’s holy-huddle on the stand I asked where Solid Edge was. I was directed to a line of writing about 1″ high near the floor on the back wall and told that Siemens offer so much that they didn’t want to be tied to one product at such an event. While the other stands were heaving, Siemens staff seemed to be enjoying their own company. Karsten Newbury had even flown over to give a keynote speech but Edge hardly got a mention. There was more mention of NX from the Red Bull Racing speaker.
I too have offered to support a user-group but have been told “feel-free”, but without a list of users and some heavyweight support (both required from Solid Edge) nothing will happen – nor has it.
Like you, I have to make my own way in the world so I will not be at SEU either. I was at the 1st in Huntsville, as you know, and I think I was the only “paying guest” from UK (if not Europe). It sounds like this year will be little different (except for me).
I have just signed up for 3 more years Edge support but having now been abandoned from the Newsgroup, as the NNTP contributors were apparently not worth Siemens’ effort to keep us online, there are fewer and fewer reasons to feel part of a community.
Who said work had to be fun?”

And to this users comment I would add who said corporate management had to be functional. Say, do you guys have dart boards to?

This entry was posted in machinedaudiohornlens.com and tagged Siemens, Solid Edge, Solidedge. Bookmark the permalink.