OK, You Designed It, How Do You Propose I Make It?

One of my pet peeves is how the idea of designing things has become the end of the process of manufacturing for so many. I guess if I sat in a cubicle and all I knew was based on classroom training and I had never dipped a toe into a manufacturing facility I could think this way. Or if I was silly enough to think manufacturing began and ended with my scintillating but academic
design genius capabilities as I sat behind my monitor. So then this bit of enlightened design meanders it’s way through the process where hopefully someone with a bit of sense will see it before it gets out to the people who will be asked t0 make it.

Such were the thoughts going through my mind this week as I regarded a part that I had been sent to quote on. Now keep in mind these guys know what I have for equipment and they thought that this was a part suitable for milling. 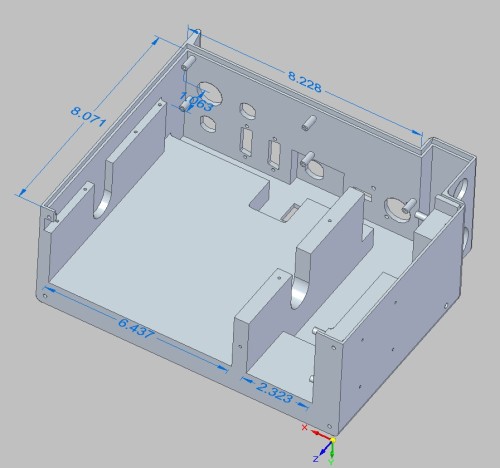 I am sure that all the plugin connections were dimensionally correct and that sufficient space in the “box” was allowed for components according to precise sizes garnered from somewhere. The problem is however that this designer had absolutely no idea of what is required to allow for milling this kind of part. First off this is impossible to mill unless done as four or five pieces that would be assembled with fasteners or perhaps welding. It could be done with some of those new fancy metal powder deposition laser doo-dads. Except for the problem of how to tap occluded holes in some of the round bosses I think it would be possible there. But then again this would never yield quick or cheap parts for something that was to be mass manufactured. You could afford to make one this way if it was to be used as a pattern for molding. But then you would have to drill and tap those holes on those bosses on every casting and quite frankly I don’t know a way that this would be possible except with a through hole which is not indicated based on the part file. In any case I am not familiar enough with casting to know if this is a feasible design.

What I am going to do is go through this part and show reasons why this cant be milled. It is my hope that perhaps this will get some of you who are not familiar with machining to reconsider how you go about designing. This guy spent his time designing something that cant be machined and at the very least he wasted his time and the time of shops sent RFQ’s.

Join me as we venture into the never never world of inexperience.

5 responses to “OK, You Designed It, How Do You Propose I Make It?”