One of the things I envied for years when I was on the outside looking in was the speed with which HSM has made updates available. Besides the year updates there are two other types. The latest official version is the one that has been vetted by means I do not know of right now for QA. The other is developmental which comes with the admonishment “not for production use”. In practical experience though if there is something you really need in one of these all it means is to go slow the first few times and make sure it works right for you would be my opinion. There are some turning things I want to try so I intend to grab this one. 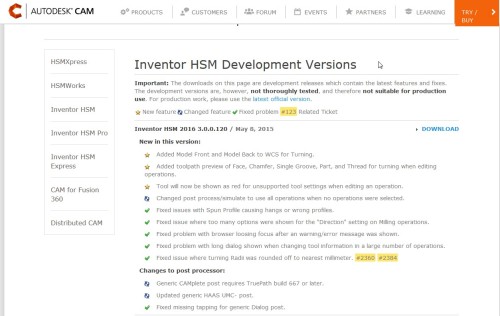 While there were things that did not get into the official 2015 release it is HSM’s intention to as quick as possible work on getting the new turning and the Hole Wizard done ASAP. Turning by the way is supposed to be a complete revamp which would be good since turning has been a big weak spot in an otherwise powerful program. My guess would be that these will first appear here in the development side so early adopters keep an eye out. The philosophy that HSM has had for some time now is to have regular updates figuring that it was more beneficial to the customer to get working tools in hand rather than making us wait for an annual or semi-annual update that made a big old impressive looking list but also delayed significantly the improvements put into users hands.

HSMWorks for example had at least seven official versions for 2014 so if this is a typical average every other month will see new tools or bug fixes in your hands. There have also been thirty-seven developmental releases for HSMWorks for 2015 so far so there have been many things made available to users if they need them before the aggregate official versions get out. The pace of the official versions for HSMWorks has slowed down a bit for 2015 but these guys have had a ton of stuff on their plates with the integration with Autodesk so I can understand. Considering the world of CAMWorks which I came from the update rate here is amazing and quite frankly the idea that we users are important to HSM is a big breath of fresh air. It is HSM’s intent that some time this year the SW and Inventor and online programs will achieve near parity in features and be handled the same from then on.

By the way http://cam.autodesk.com/inventor-hsm-experimental/ will take you to the developmental I-HSM page where there are links to all the other flavors to. It is worthwhile to have a look and see what people who want you to succeed think is the right way to bring new features and bug fixes quickly to you. It is one of the things that influenced me when I was shopping some years back and still does.